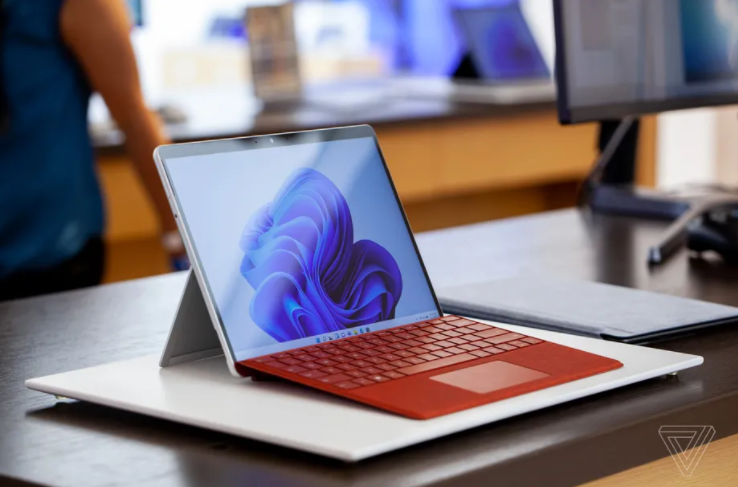 During its recent Surface event, Microsoft launched the largest upgrade of its flagship Intel-powered Surface Pro lineup in years: the Surface Pro 8. The new 2-in-1 machine boasts a 120Hz display, Thunderbolt 4 support, and new processors, but all of those improvements come at a cost — literally. Whereas the Surface Pro 7 starts at $549.99, the Surface Pro 8 starts at $1,099.99, meaning it’s nearly double the price. And that’s also before you factor in the cost of Microsoft’s new stylus and detachable keyboard, two add-ons that are more like necessities if you intend to use the 2-in-1 as advertised.

With all that said, is it worth upgrading or picking up the Pro 8 over the last-gen model when it launches on October 5th? To help make your decision a little easier, we’ve put together the comparison below based on specs and our initial impressions of the Surface Pro 8.

WHAT’S IMPROVED ON THE SURFACE PRO 8?

Spec-wise, the display on the Pro 8 is significantly better compared to its predecessor, given there’s now an option to ramp up the refresh rate from 60Hz to 120Hz, which could improve scrolling and make using the stylus easier. Gaming could certainly be more enjoyable on the Pro 8, too, especially given the device comes preloaded with the Xbox app and a one-month trial of Xbox Game Pass Ultimate. In addition, the latest Pro supports Dolby Vision and is the first Surface device to come with an ambient color sensor, which automatically adjusts the display’s color temperature and brightness based on the surrounding lighting conditions. The new Pro 8 also boasts a 3:2 display and 2880 x 1920 pixels as opposed to 2736 x 1824, although, technically, both share the same 267 pixels per inch. Regardless, the expanded size still offers you a little more space for, say, multitasking.

The Pro 8 also appears to be superior to the Pro 7 when it comes to performance and battery life. The new 2-in-1 is available with either a quad-core, 11th-gen Intel Core i5 or Core i7 processor, and with up to 32GB of RAM. The Pro 8 also comes with a removable SSD in one of four configurations: 128GB, 256GB, 512GB, or 1TB, something you could previously only find on the Pro 7 Plus. It’s important to note, however, that Microsoft says the SSD should be repaired or replaced by a trained Microsoft-authorized technician — they’re “not user removable.”

The Pro 7, meanwhile, comes with a dual-core, 10th-gen Intel Core i3 or a quad-core, 10th-gen Intel Core i5 or Core i7, and with up to 16GB of RAM. It’s available in 128GB, 256GB, 512GB, and 1TB capacities. Overall, Microsoft says the Surface Pro 8 shows a 40 percent improvement over the Pro 7 when it comes to sustained CPU performance; it’s also 74 percent faster on the graphics side, according to Microsoft.

Battery life on the Pro 8 is, at least on paper, greater as well, with Microsoft claiming it can last up to 16 hours on a single charge. The tech giant also says it can charge from 0 to 80 percent in a little over an hour. The Pro 7 was supposed to last up to 10.5 hours on a charge in comparison, though, in our review, we noted it lasted 7-8 hours or less when working with graphically intensive apps and pages. We don’t expect Microsoft’s battery claims regarding the Pro 8 to hold up in real-world usage, though, especially with a 120Hz display.

The Pro 8 additionally stands out in some ways when it comes to connectivity, depending on your needs. Instead of a USB-A port and the integrated microSD card slot featured on the Pro 7, Microsoft went with two Thunderbolt 4 ports, allowing the tablet to support either two 4K displays with a 60Hz refresh rate or a single 8K monitor at 30Hz. The Core i3 and Core i7 models can also be configured with LTE, though the feature is only available to enterprise customers.

The Pro also boasts better cameras than its successor. The new model’s rear camera is a 10MP shooter as opposed to an 8MP, and the rear camera on the Pro 8 can also capture 4K video. The Pro 8’s new face-tracking tech could also improve video calls by keeping you in focus while you walk around and talk. Microsoft says the Windows Hello camera has been upgraded, too, and it pairs with Microsoft Studio mics for audio.

Unsurprisingly, Microsoft also improved the Pro 8’s optional accessories. The new Surface Slim Pen 2 ($129.99) features a sharper tip that allows for better precision and a built-in haptic motor, which helps the stylus better emulate the feeling of writing on paper and makes for a smoother inking experience. You can also charge the pen inductively when you’re not using it via the built-in slot on the detachable Surface Pro Signature Keyboard ($179). The new keyboard is also stiffer thanks to a carbon-fiber core, but not heavier or thicker, which gives it less bounce when typing.